Do you have plant questions? We’ve got plantswers! Daniel Cunningham, the horticulturist and plant guru at Rooted In, goes out on a limb to answer your budding curiosities with tips on growing lush landscapes, productive vegetable gardens and green lawns. Ask YOUR questions online by using the hashtag #plantswers! To listen to this episode visit https://www.buzzsprout.com/1495072 . 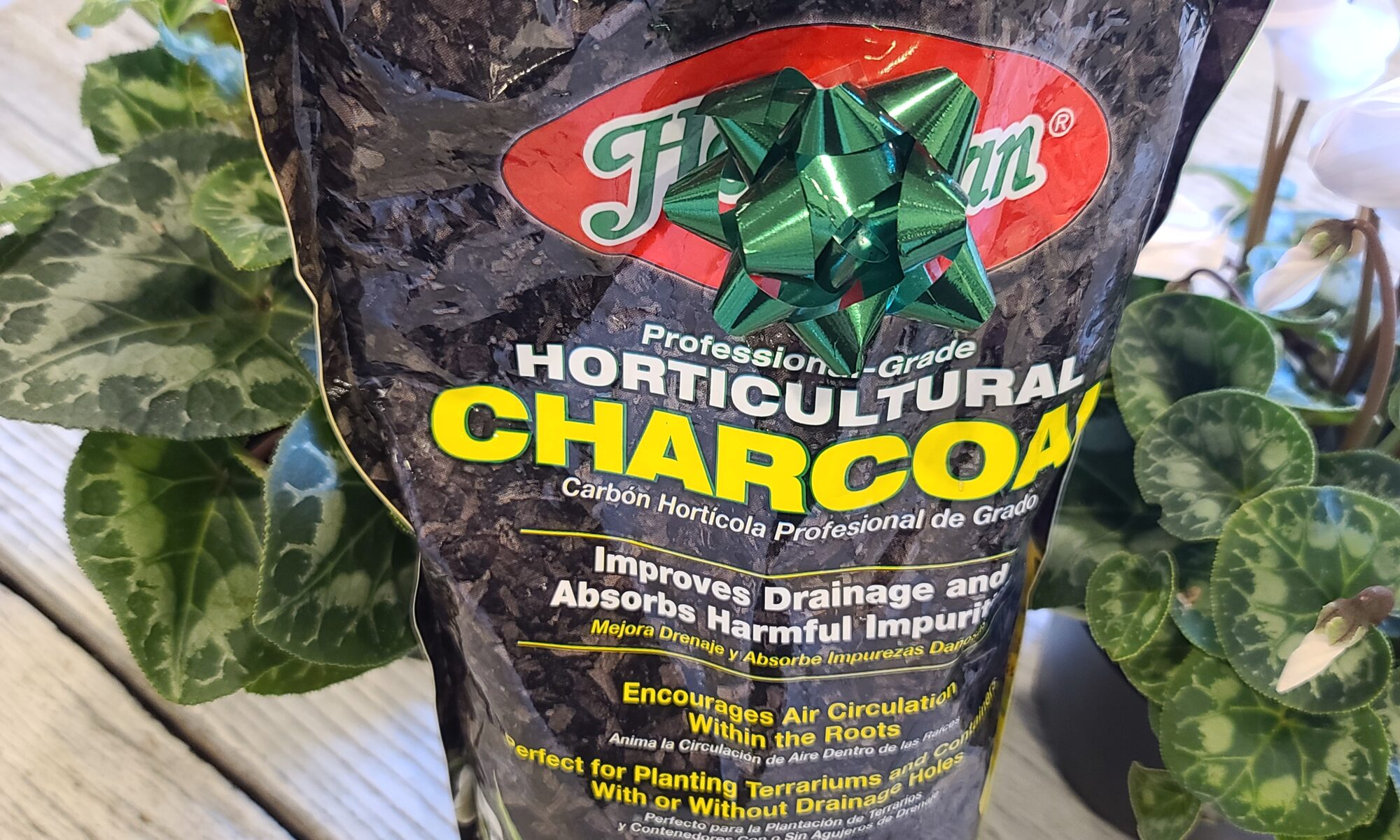 One of the silver linings to spending more time at home is an increase in time spent taking care of our plants. In fact, gardening indoors and out is a hobby now more popular then ever.

If you’re searching for that perfect gift this holiday season or you just want to brighten someone’s day with the gift that keeps on growing, you might just dig one of @TXPlantguy’s favorite options.

END_OF_DOCUMENT_TOKEN_TO_BE_REPLACED

NORTH TEXAS (CBSDFW.COM) – “Friday November 6th is Texas Arbor Day. Don’t confuse this with National Arbor Day that falls in April of every year. The reason for a different Arbor Day celebration in the Lone Star State? Timing.

You need to remember the next sentence if you are going to live in north Texas. Late Fall is the time to plant a tree. There are many reasons for this but it all has to do with how the tree prepares itself for the upcoming growing season.”

To watch to whole segment, visit our friends at: https://dfw.cbslocal.com/2020/11/04/gardening-101-plant-a-tree-in-honor-of-texas-arbor-day/

“You can throw them out of a moving car, from a bicycle, on a hike,” says Daniel Cunningham, a horticulturist at Texas A&M, who has conducted preliminary trials on bomb-making techniques that lead to higher rates of seed germination. Before you go launching wildflower seed projectiles, start with a solid recipe. You’ll need a mixing bowl and baking sheets. Add one part native wildflower seed mix — Cunningham’s include bluebonnets, blanket flowers and native grasses, but yours should reflect what grows endemic to your region — to four parts powdered clay and five parts fine-grained compost. Mix the dry ingredients thoroughly and stir in water slowly until you have a thick, bread-dough-like consistency. 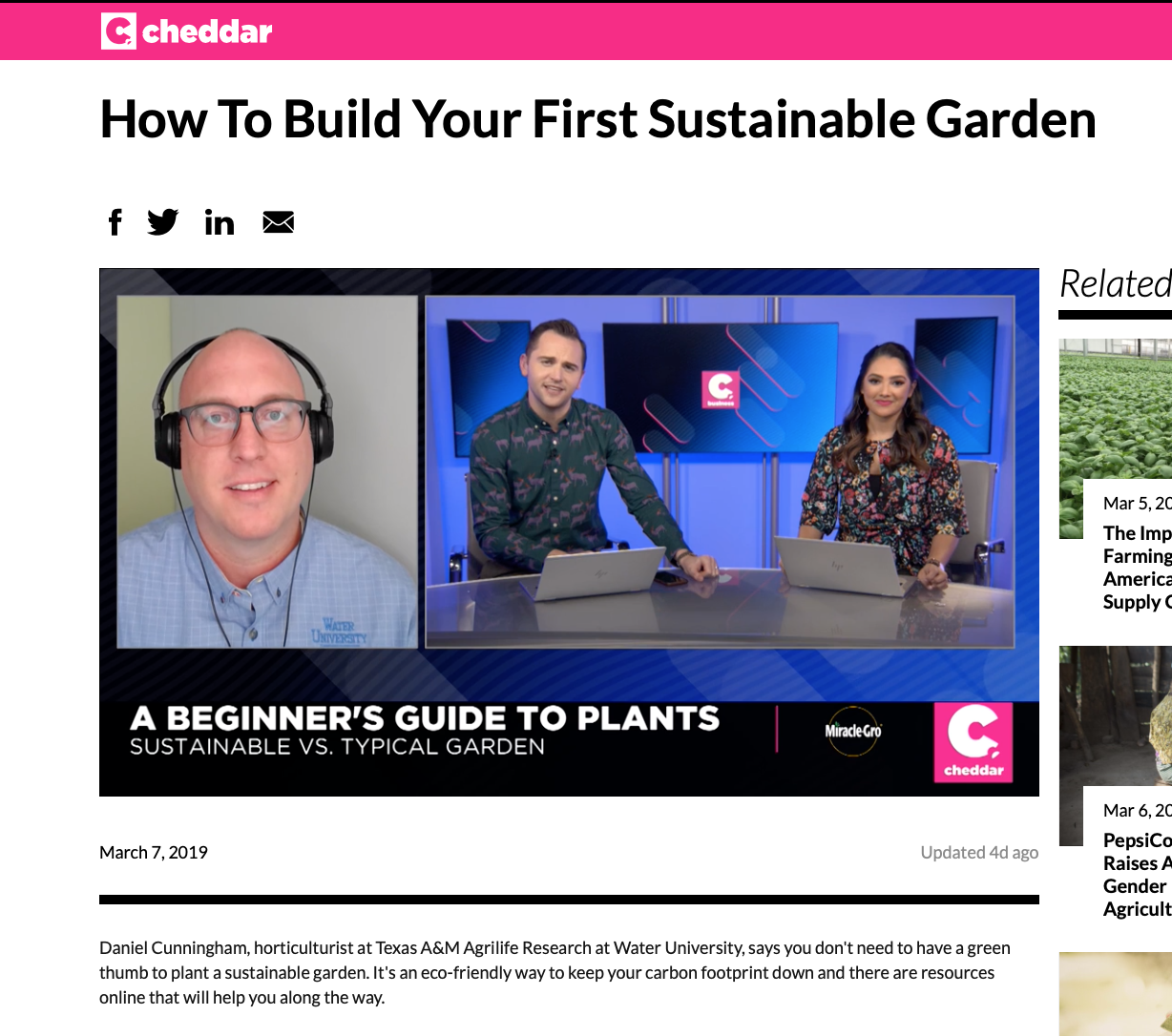 Daniel Cunningham, horticulturist at Texas A&M Agrilife Research at Water University, says you don’t need to have a green thumb to plant a sustainable garden. It’s an eco-friendly way to keep your carbon footprint down and there are resources online that will help you along the way. 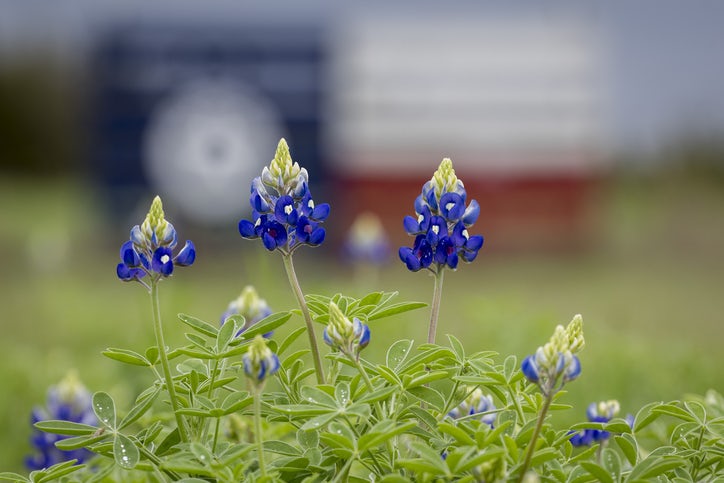 For Dallas-Fort Worth, last fall was the wettest on record with 29.21 inches of rain from September to November, according to the National Weather Service. In October alone, Dallas-Fort Worth picked up 15.66 inches, nearly four times the area’s 4.21-inch average for the month.

Daniel Cunningham, a horticulturist and project manager with Texas A&M AgriLife Research, said North Texas is beginning to see promising signs of this year’s wildflower season, with basal rosettes already growing in dense patches across the Dallas-Fort Worth area.

“Higher-than-average rainfall in most of North and Central Texas definitely bodes well for our bluebonnet forecast,” Cunningham said. “We’ve had ample rainfall this winter as well, assuring that moisture is not likely to limit their growth.” 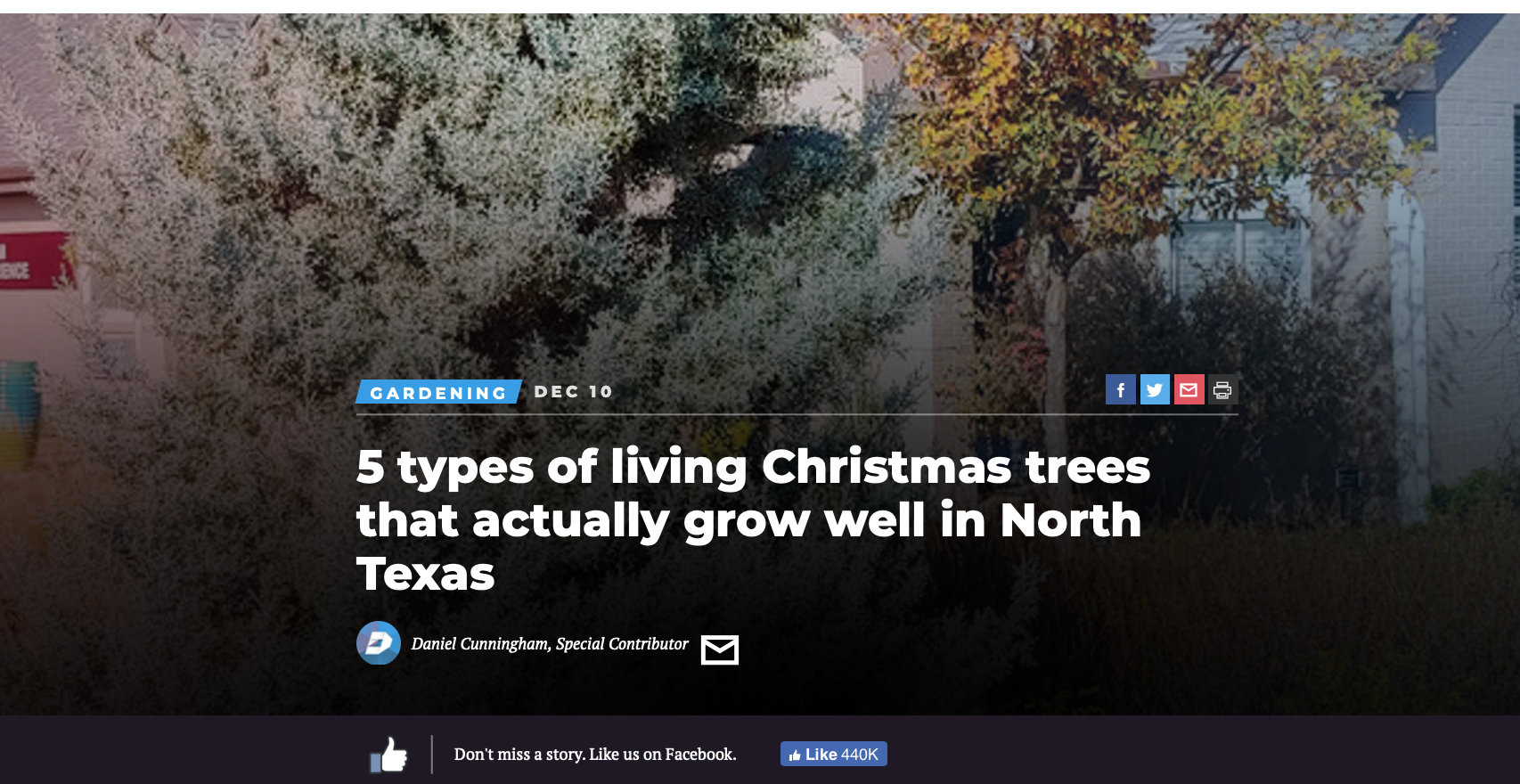 Full disclosure: I hate artificial plants. Last week I jokingly told a co-worker that if anyone put artificial plants on my grave, I would come back and haunt them. But Halloween is long over, and Christmas music is playing almost everywhere you go. So let’s talk Christmas trees.

As a horticulturist whose sole purpose is growing (and teaching folks how to grow) plants more sustainably, many of the people I run into still believe that artificial turf, plastic interior plants and even artificial Christmas trees are more sustainable because they use less water and fewer fossil fuels or that they save a tree from being cut down. But most of the time, that really isn’t the case. In fact, there are a number of environmentally friendly reasons to buy a real Texas-grown Christmas tree from a local tree farmer or cut down the tree yourself as a family outing to make lasting memories.

So far this year DFW has had only a little over 1" of rain (or rain equivalent since some of that was snow). That changes is a big way starting tomorrow. Join me at 4pm with @CBS11Ken. Also showing some timely post-hard-freeze plant advice from @TxPlantGuy #CBS11wx #dfwwx #txwx

We've got more FRUIT TREES in stock for our Drive-Thru pop-up nursery THIS Saturday 2/27 in the parking lot of our friends at @RoosterHandH! PRE Order HERE ⏬⏬, and a little rooster told me... there might be a special bonus in it for you! 🐓🌳https://t.co/i4d4bVMo5G

Many of our #txplants are a little worse for the wear after this crazy #txwx but there is hope!! Here's what you can do to get growing again!

🌿Pause before you prune, and other super helpful tips on rescuing your plants from the freeze, by @TXPlantGuy https://t.co/VEHHZIzW6b

The @CityOfDallas announces a Bulk Water Pick Up Program.

To assist residents without water due to needed building repairs, Dallas can fill water containers up to 15 gallons at warming centers. Residents can fill containers between 10 a.m. & 8 p.m. https://t.co/gmzqMBP8mZ

Here are the bottled water distribution centers for Saturday 2/20.